So keep getting targets in even if you have to shot into September.  I’ve posted all I have as of 8-31.  Our final shoot is scheduled for Sunday, Sept 26th!  I would think we could start at 11 a.m. and schedule 4 shooters every 1/2 hour.  About 10 active shooters would have us finish within a couple hours – maybe in time for us all to have a couple beers/sodas up in the clubhouse afterwards.

Unlimited Class is an “anything goes” class for high end production rimfires and custom 22LR Benchrest rifles. There is no limit on scopes – they may more than 20 power. There is no max weight limit, but rail guns are not permitted.  Examples of production rifles that are included in Unlimited would-be Anschutz actioned rifles including the 2013, Kimber 82, Remington 40X, Suhl 150, Walther KK200 and KK300. Within the guidelines listed, there are no limits on modifications other than safe operation. Stocks, barrels and triggers may be adjusted, modified or replaced with custom items.  All rifles that have been customized are included in Unlimited . . . some are rifles built on custom actions such as the Turbo, Hall, Swindlehurst, X-III, Stiller, etc. Any custom barrels – makers include Benchmark, Lilja, Shilen, etc.  Any rifles with custom triggers are in this class.  Semi-automatic rifles ARE permitted.

Sporter will be for Premium Factory rifles ($1000.00 msrp & up) with no modifications allowed. The factory trigger is required but it may be adjustable.  Any fixed or variable power scope may be used up to 20 power.  Barrel tuners, or bloop tubes are NOT permitted in Sporter Class (simple rubber mid-barrel dampers are permitted).  Semi-automatic rifles ARE permitted. Bipods may be the standard hunting style folding bipods, such as the Harris line or something similar.  Rifles weight with scope must be less than 13lbs.

Any rifle exhibiting unsafe behavior or malfunctions will be removed from the firing line.  Ammunition may not be modified in any way.

Rimfire Benchrest is a “for score” league.  Each week league participants will shoot a target with 25 individual targets at 50 yards.  One shot per target is allowed.  The 25 targets are shot within 30 minutes.  Sighting/warm-up shots are taken as needed.

The targets have progressively larger scoring rings with the smallest being the “X Ring” and each larger ring worth one point less; 10, 9, 8, 7, etc. A perfect numerical score would be 250 points. 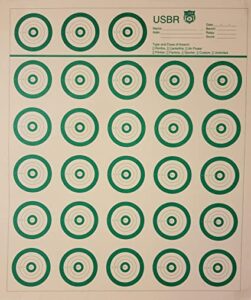